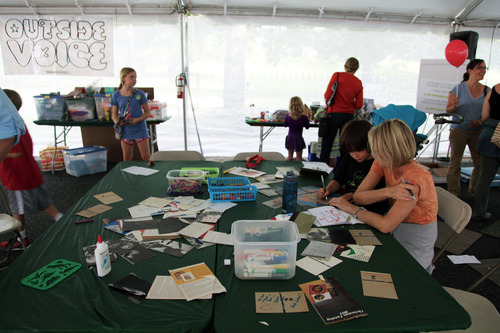 Texas Book Festival gave us the opportunity to connect and collaborate with Slow Family Living and make some new friends. We hosted activities from 3-5 on Saturday, Oct 26. Kids and parents explored journaling together, wrote postcards made out of old LP covers, and collaborated on an" Exquisite Corpse.“

What’s an Exquisite Corpse, you ask? Simple. It’s a story or work of art made by a group of people, each person playing off the previous sentence, word, drawing, etc. A bunch of Surrealists came up with the idea in 1932. And people have been experimenting with the form ever since. Time for a joke break:

Q:How many Surrealists does it take to change a lightbulb?

Make Your Own Exquisite Corpse
Each kid randomly selected a word from the WORD BAG we made. The word then must be used in an original sentence, with encouragement to connect the sentence to the ideas in previous sentences. We helped them add adjectives and color to their sentences. And the results were ridiculous and unexpected (see below). 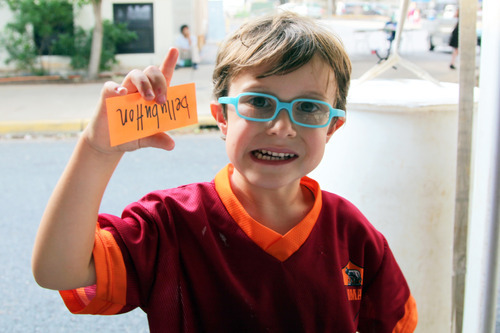 And in the end we had a story with lots of different contributors from ages 5-15. 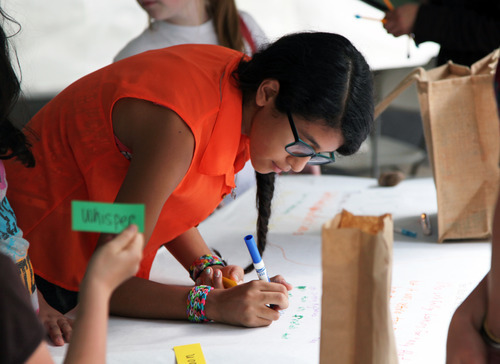 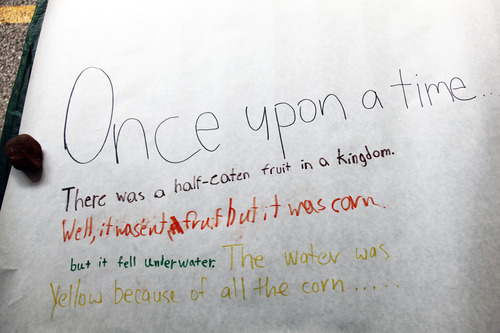 Once upon a time…there was a half-eaten fruit in a kingdom. - Well, it wasnt fruit but it was corn- but it fell underwater.-The water was yellow because of all the corn- When the fish bit the corn -It turned to velvet.-Then a bug saw the fish- Who was really looking for a yummy hot dog- But it was getting too dark to find the hot dog - So he had to settle for some broccoli. - Then he saw the moon and it turned him into something mysterious -So then his friends took him to the scientist- Who recommended to have a dance party! - At the party, strangely everyone spoke in a whisper- But the queen refused to whisper -Then the party was transported to outer space - And then they saw some aliens with fifteen hundred thousand bellybuttons! -For party favors they gave the aliens lots of brown chocolate and rainbow candy. There was some icky candy, too. Such as "choccoli” candy, which is broccoli mixed with chocolate. EEEEEEEW! This tastes disgusting, despicable and YUCK! - Then a weasel ate some too and it was delicious.- Then the weasel tasted some stinky cheese and said that it was good. The End.

Check out our Archives

Have you ever thought about dressing up like a famous painting?... Posted on May 09, 2014